Now through March 31, receive up to 25% OFF popular luxury Caesarstone & Silestone quartz.
To receive this limited-time promotion, request a free quote today and enter the promo code 'Happy2022'.
Click here to Learn More 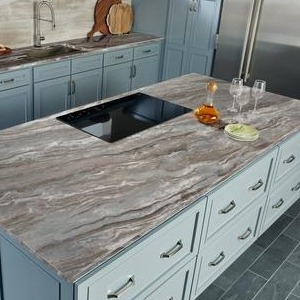 There have been many great debates in the course of history…including the great debate among stone fabricators, designers and builders: is Fantasy Brown a marble stone or a quartzite stone? Although these two types of natural stones are similar in nature, they have their distinctive qualities. So, why is it so hard to easily categorize Fantasy Brown?

Here’s what you need to know about this interior design debate. May the best stone win!

Let’s start by detailing the features of the Fantasy Brown designation. This natural stone variety is prized for its dramatic appearance, paired with neutral tones. The colors present in Fantasy Brown include brown, beige, white, gray and gold, making for a blend of warm and cool tones that will effortlessly go with most design aesthetics. No matter which woods or paint colors you choose, they’re going to look fabulous with this beautiful, versatile stone. 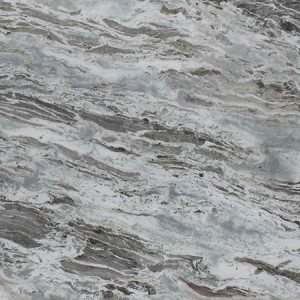 With so many neutral hues, you might naturally fear this stone is lacking in character, but just the opposite is true thanks to remarkable depth and movement. Heavy striations flirt with faint, nearly translucent swirls in paler shades, creating a powerful juxtaposition that’s impossible to ignore. There’s a reason it earned the “fantasy” moniker, but its stunning appearance is only one of the reasons this countertop surface has become so popular of late.

What Makes it Fantasy Brown Marble?

As you can see in the description for this transitional kitchen, the waterfall island is listed as Fantasy Brown marble, while other white countertops are designated as quartz.  Why do they list the Fantasy Brown element as marble instead of quartzite?

There are many characteristics inherent to the marble classification, not the least of which is the geological makeup of the stone. Fantasy Brown, quarried in India, features a mineral called calcium carbonite that is particular to marble, hence the classification. Unfortunately, some of the other features of the stone are closer to quartzite than marble, making for some confusion.

Why is Fantasy Brown Confused for Quartzite?

Although the geological composition of the stone marks it as marble, it’s natural to understand the confusion that leads some to classify Fantasy Brown as quartzite, as in this New England beach house, where the interior designer lists the lovely gold and brown countertop as Fantasy Brown quartzite. The problem lies in the physical characteristics of the stone.

To the naked eye, some natural stone samples in marble, granite, and quartzite can look surprisingly similar. Aside from their geological makeup, there are certain characteristics that tend to set them apart. One of them is the relative hardness of the stone.

While granite is typically considered to be especially hard and resilient, and marble is known for being more delicate, quartzite has emerged as the frontrunner in this particular race, with a rating of 7 on the Mohs hardness scale. Granite is close behind, ranking at 6-7, and marble comes in around 3-4.

Why is this important? It has to do with the durability of your countertop surface, especially where etching is concerned. Whereas softer surfaces like marble could suffer etching when exposed to acidic substances (like lemon juice or vinegar), harder stones like granite and quartzite prove to be more resistant. Fantasy Brown stone has a unique distinction among marble varieties in that it happens to be surprisingly resistant to etching.

It doesn’t help that marble and quartzite can look extremely similar when it comes to the coloration and veining of some varieties. The important thing to remember is that classifying it as marble will ensure that homeowners and professionals realize that it is a softer stone type, and should be mindful of scuffs, scratches and etching.

Because of the geological components found in Fantasy Brown stone, it seems to fall squarely into the marble camp. As noted above, this is actually an important distinction because it can frame expectations for hardness, resistance to etching and overall performance.

Whether you lean toward marble or quartzite, if you find yourself drawn to Fantasy Brown, you’ll be lucky enough to enjoy a remarkably beautiful and versatile marble that just happens to feature a measure of the resistance to etching that makes quartzite so desirable. In other words, it’s the best of both worlds.

Ready to Get Started?
Natural stone, such as Fantasy Brown marble, can make for stunning and long-lasting kitchen countertop surfaces. Academy Marble & Granite invites you to visit our showrooms in Bethel, CT and Rye, NY to find the ideal natural stone countertop for your home.